Photographers and agencies have become known to manipulate images to that all important sensational shot, securing sales to the media. One particularly well known example was from 2008, where a doctored image of 4 Iranian test missiles below (top) was 'captured' and featured on a variety of news sites and internationally sold newspapers. Supplied by the Agence France-Presse, who claimed they obtained the photograph from Sepah News, the image includes a fourth rocket covering up a grounded missile (that apparently failed during the test). The inclusion of the extra missile dramatically improves the composition and leads to a more exciting shot for media sites and papers to run with.

It wasn't until the following day that another photo (bottom) was released, revealing only 3 missiles launched at what appears to be the exact same view point. 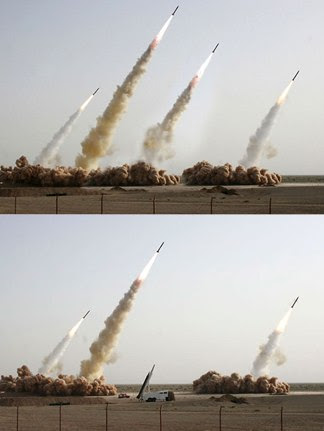 Below are images taken by Brian Walski, a Los Angeles Times photographer. the photograph is of a British soldier in Basra overlooking a Iraqi civilians while under hostile fire. The top photo is the manipulated result of the two below, merging the commanding pose of the soldier and the man clutching a young child. 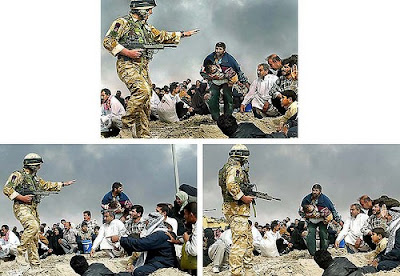 Walski clearly altered the image to a more powerful composition, which was published as the front page photo. However, his alterations were noticed by some of the journalists and Walski was later confronted a sacked after confessing to his modifications.

Although Brian Walski deserved to be fired for his actions, his photograph although dishonest didn't alter the content to any great significance but ruined he reputation and credibility as a photographer. His dismissal was met with great criticism by Pedro Meyer, fine art photographer and author. "They (the LA Times) have fired someone for doing a professional job in trying to come up with a better picture, the same way that any of their journalists polish a text so that it reads better and is succinct. (why should a photographer be deprived of doing exactly the same that other professionals are doing on a daily basis as long as the information is not distorted?). The only explanation I can find is that by accusing the photographer and attempting to portray themselves as publishing 'unmanipulated' news, they are seeking to conceal the factual reality of their biased and one-sided presentation of the overall news. That seems to be the more important issue at hand."

I can only disagree with Meyer comments, photographers especially journalist/media photographers have a responsibility in supplying true images of actions and events. We don't expect, nor want, to be mislead by adapted photography that produce a more interesting shot, although the alteration in this instance was more innocent than others it ruins the trust between photographer and viewer. As Meyer put it 'journalists polish a text', but they do this through choosing quotations to include not shifting words around to create a desired comment. Photographers can touch up saturation and enhance colour and lighting, to an extent, to produce a crisper and more aesthetic a photo, but not pick and choose elements to include to produce a better image to depict a scene that never existed. As put by Frank Van Riper in an article in response to the manipulated image and Meyer's statement, 'news photographs are the equivalent of direct quotations and therefore are sacrosanct'.
Posted by Matt Thom at 02:29